04.19.2018 – To start our little escapade, we flew from IAH, and finally made it to LAX around 1500, and got our rental car around 1600. Perfect time. NOT! Our supposed two-hour-and-a-half road trip to Palm Springs, where we booked an Airbnb took about two-hour-and-a-half plus forever. But again, that should have not came as a surprise. We’re in Los Angeles, where traffic is a norm. We  arrived in Palm Springs around 2100, did a little bit of grocery shopping (to save us some $$$), then headed finally to our Airbnb around 2200, cooked us some dinner, and got some much needed rest for the weekend shenanigans. See our VLOG for this day here.

04.20.2018 – COACHELLA DAY 1: We started our day with a good hearty breakfast, and a not so hearty cheesecake to surprise our birthday queen, Prician. Of course we made sure to stuff the heck out of us as we know that, not only would food/drink cost an arm and a leg inside the festival, but we’re pretty sure the lines would be comparable to LA traffic. Around 10:30,  we all changed to our Coachella Outfit #1, headed to a nearby windmill to have some photo op (some photos below). 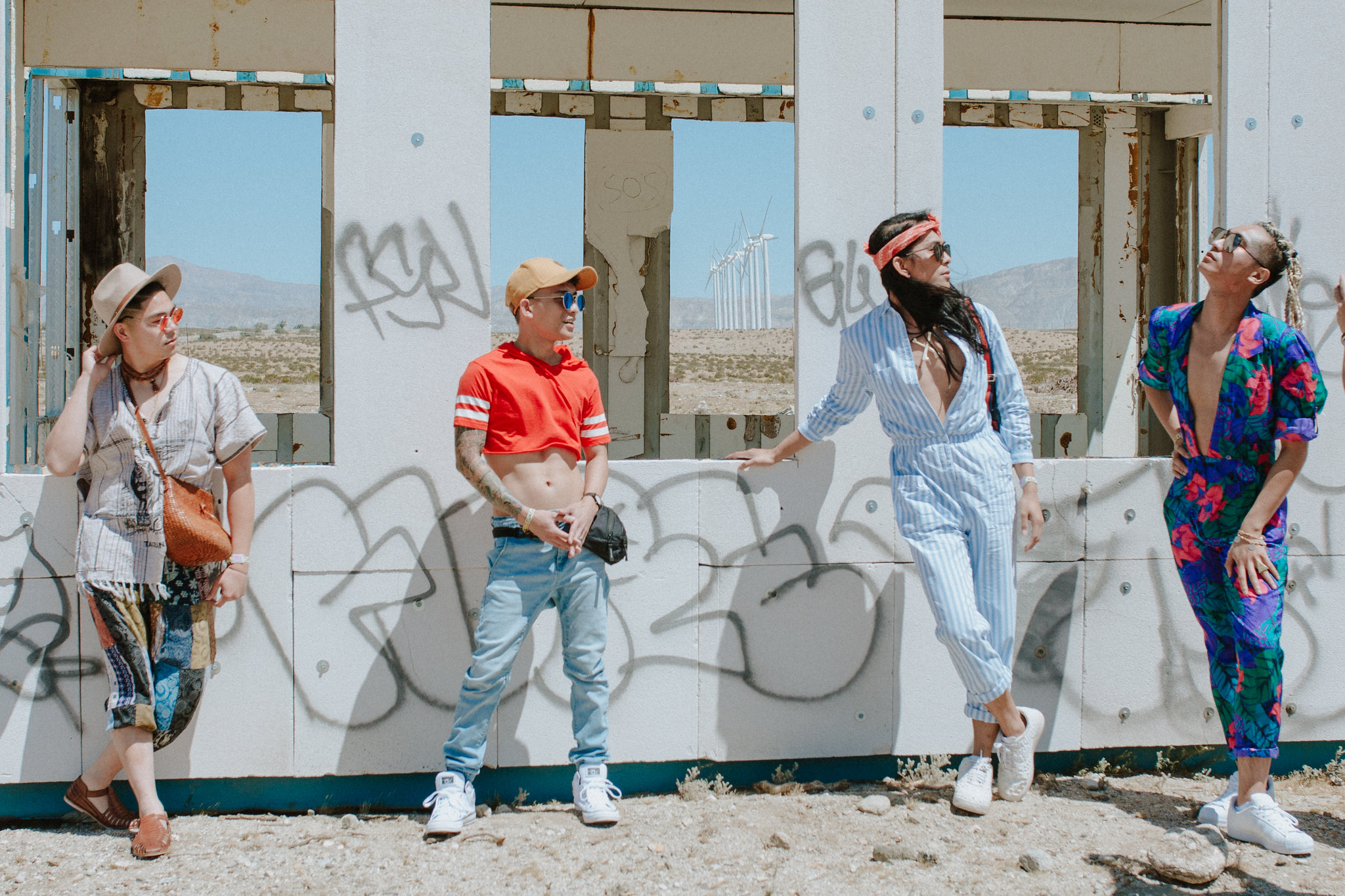 We originally planned on going straight to Coachella right after the shoot, but we finished quite early, and according to one of our friend who has been in Coachella, 1200 is quite early, especially if you’re considering on staying till the main act (which is usually around 2300). So we returned to our Airbnb, and pre-gamed. 🙂 We finally arrived in the festival around 1400. I was pleasantly surprised that, although it was quite a walk from the parking lot, the lines getting in are not as time-consuming as I had expected (recalling my ACL experience). We got right on time before Kelela got on stage. Some acts we have enjoyed on our first day are Slow Magic, Daniel Caesar, Kygo, Ariana Grande’s surprise appearance/performance which got us really hyped up, Sza, Miguel, and The Weekend. I’m sure I might have forgotten some. Nevertheless, it was a great first day for Weekend 2. 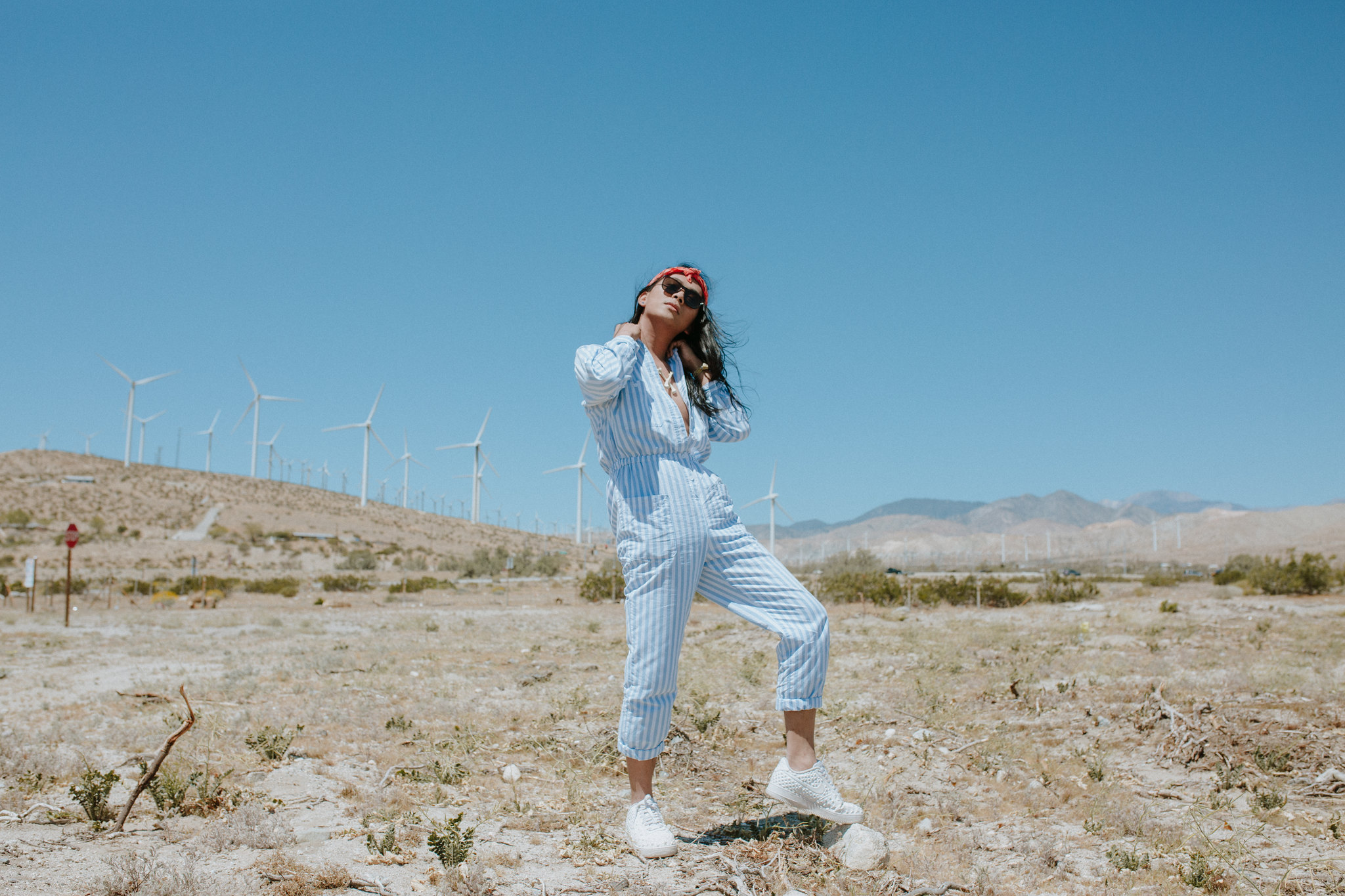 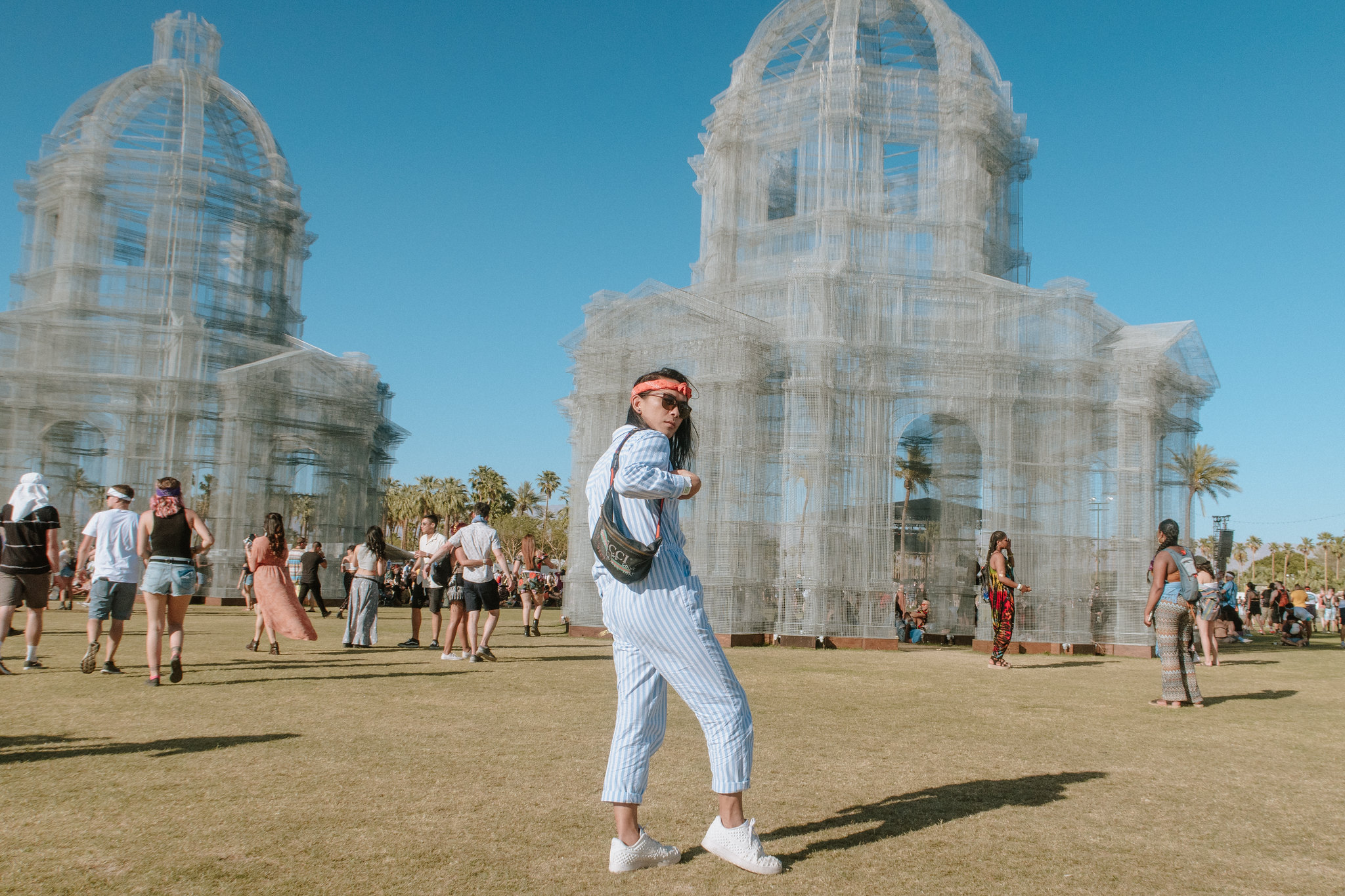 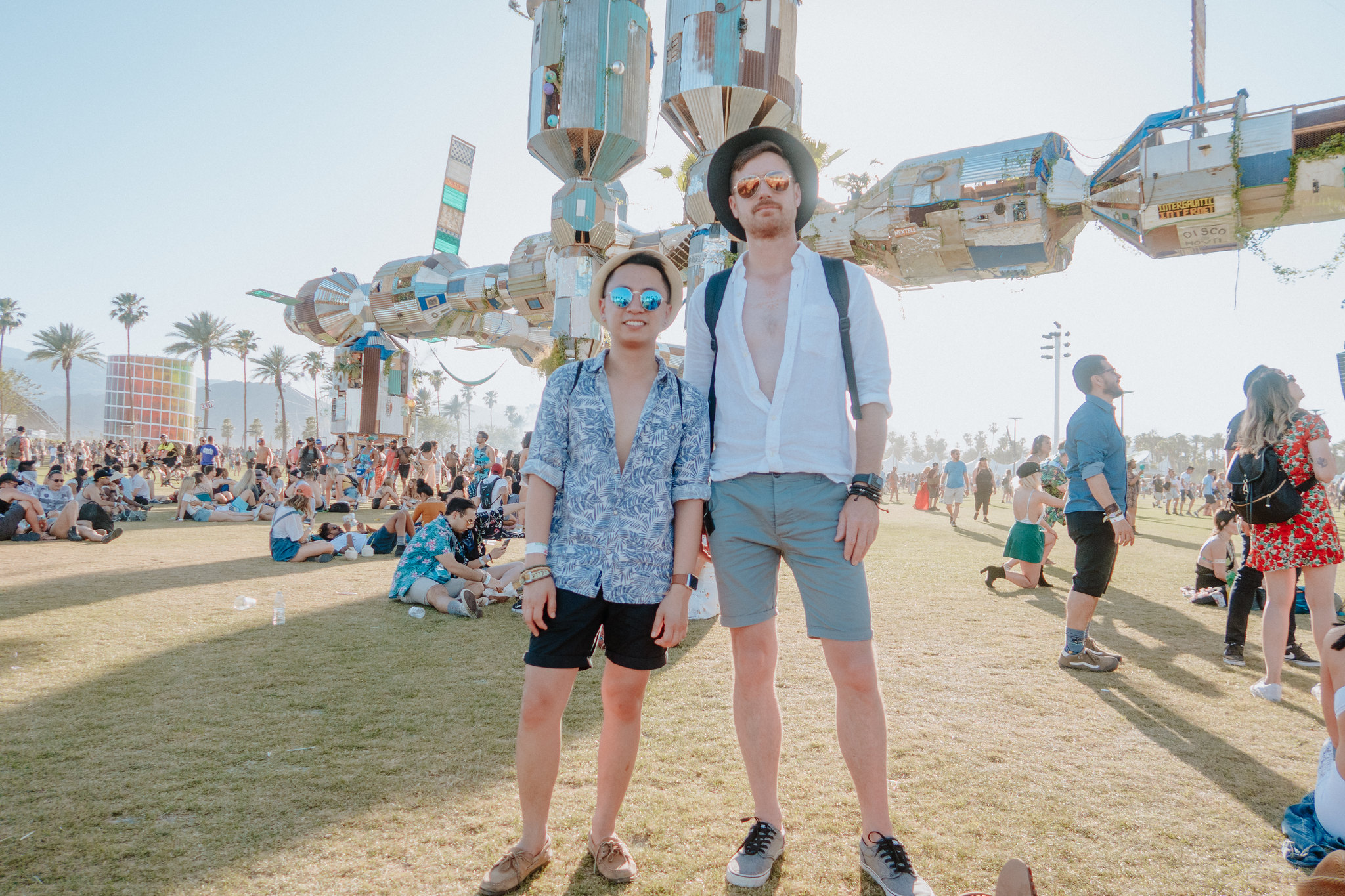 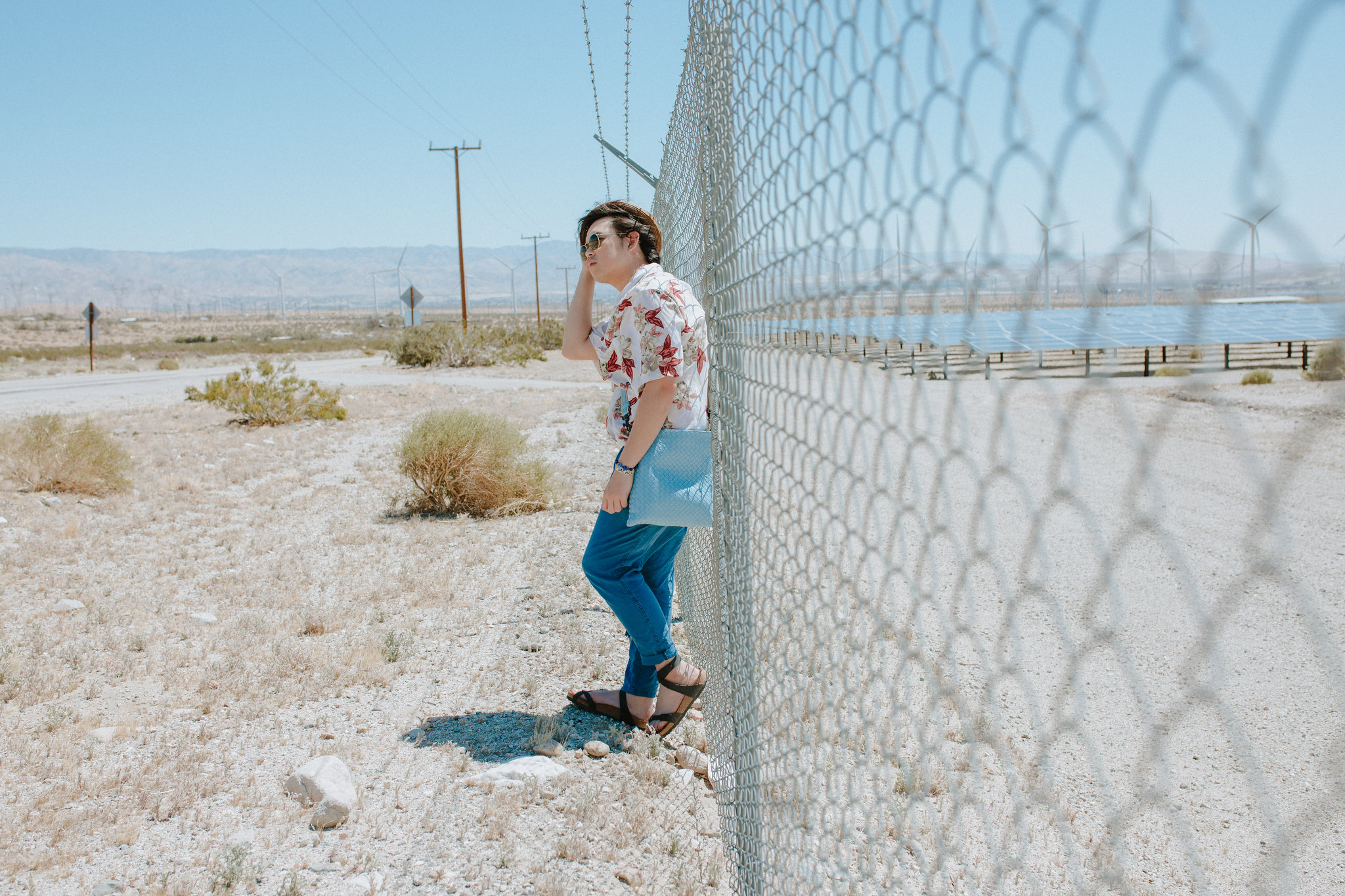 For my outfit, I got my jumpsuit/romper from a thrift store Pavement Clothing here in Houston (IG: pavement_houston). Make sure to follow them in IG and show them at checkout for a whooping 10% discount. My friend Prician (IG: prince.prician) and I were spotted by photographers from New York Times Fashion, and were asked have our photo taken, and get posted on their IG page (here) , and Style Page online (here). We were OK with it. I mean, it’s JUST NEW YORK TIMES FASHION, no biggie!!! HAHA! JK. We were STOKED!

And if these photos weren’t enough, you may watch our DAY 1 Vlog here.

04.21.2018 – COACHELLA DAY 2: It’s the Queen Bey’s day! Some of us got sick after first day so we decided to sleep in a little bit, or may be a little too much. As for me, I was feeling great, I started getting ready at 1300 while everyone are still trying to catch some zzz’s, mainly because, I admittedly take the longest to get ready. It was around 1630 when we were finally satisfied with the way we looked and left Palm Springs. We stopped by at a gas station nearby, overlooking the “Coachella” mountain, and had a quick photo session using my DSLR before getting inside the festival (cameras with detachable lenses are not allowed inside, which sucks, but I guess it’s fine as it would have annoyed the heck of me holding that ginormous thing). 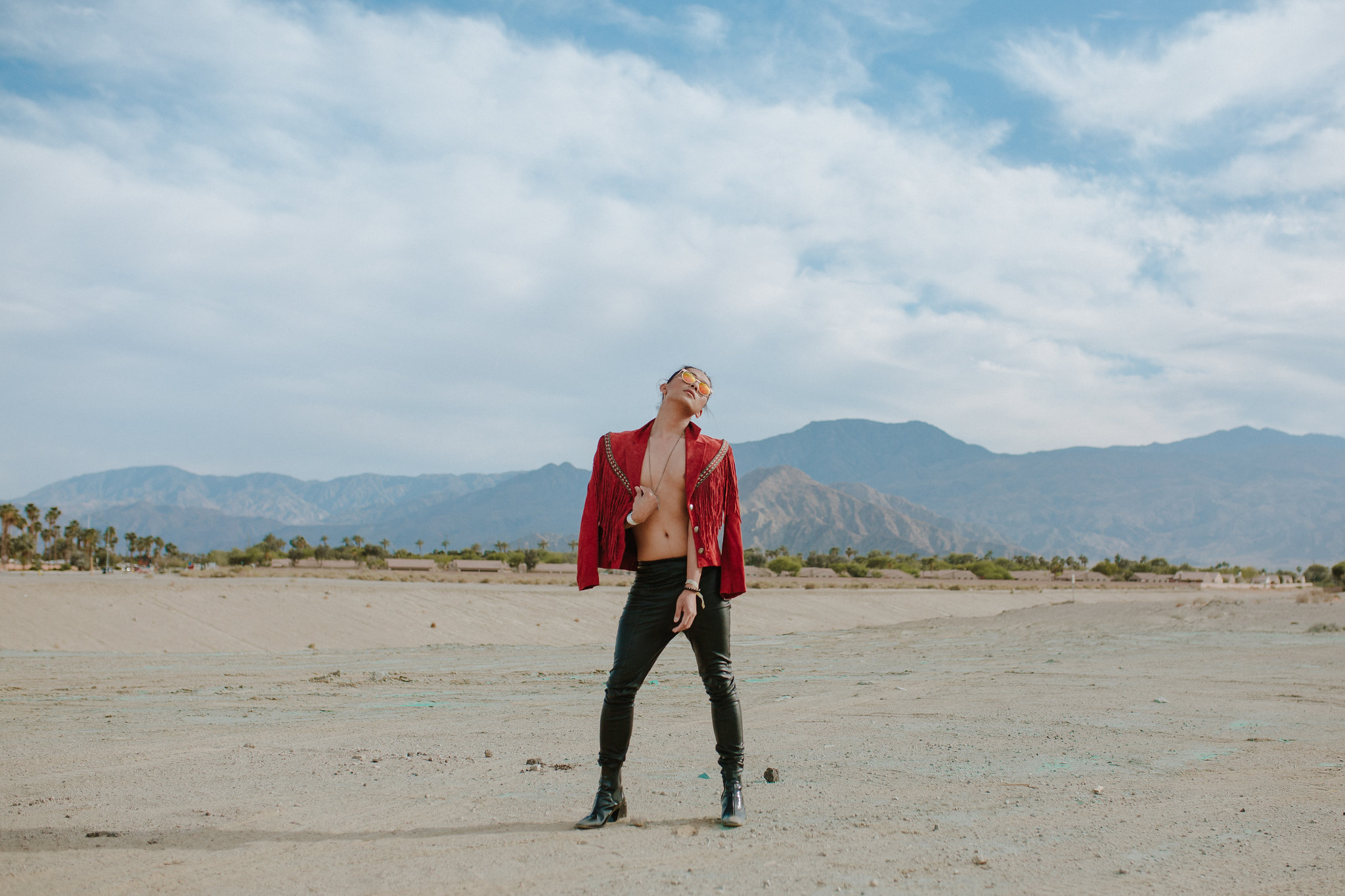 What I wore: Sunglasses from Asos, Fringed Suede Jacket from Thrifted (Flamingo Houston), Leather Pants, and Boots from Topshop, 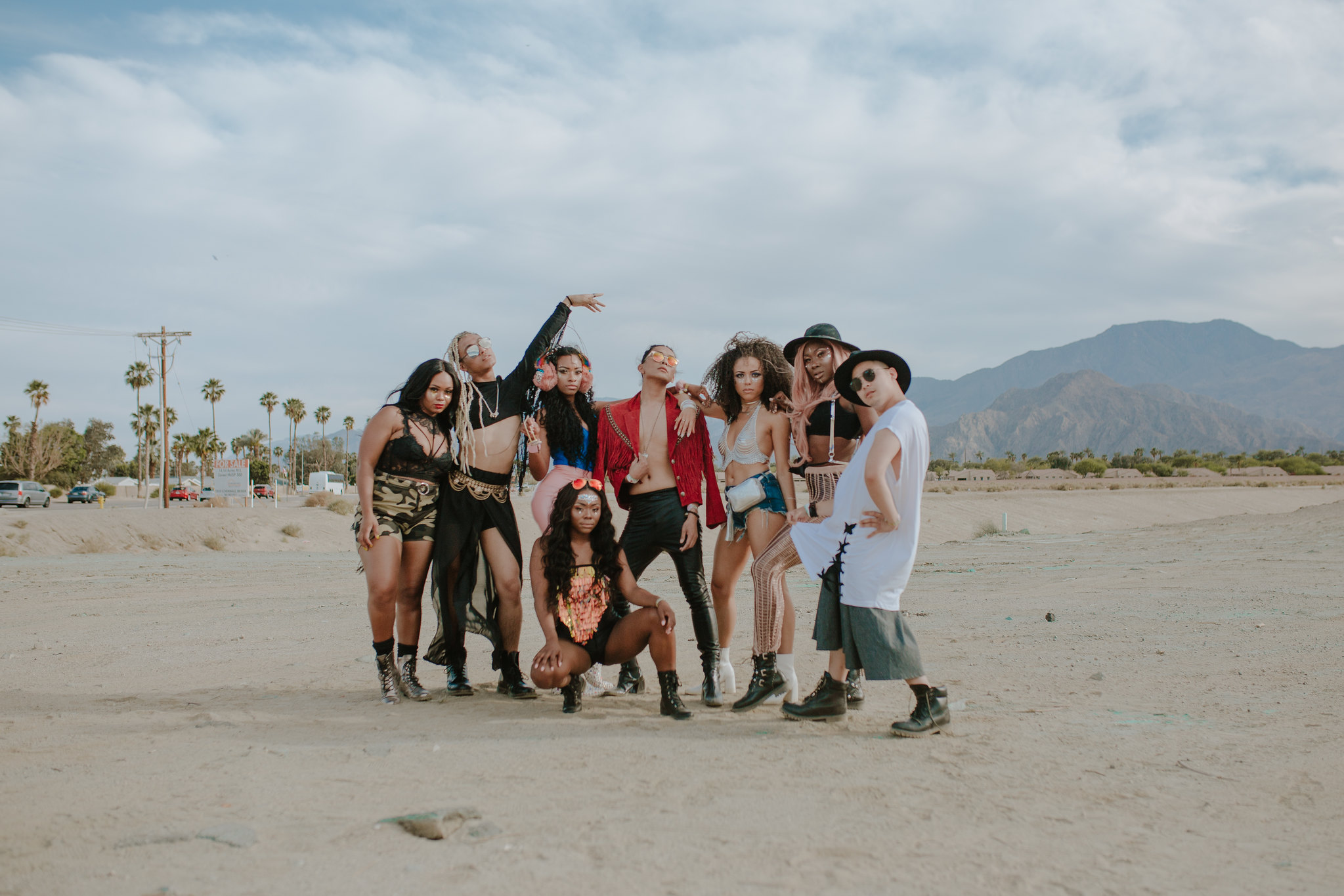 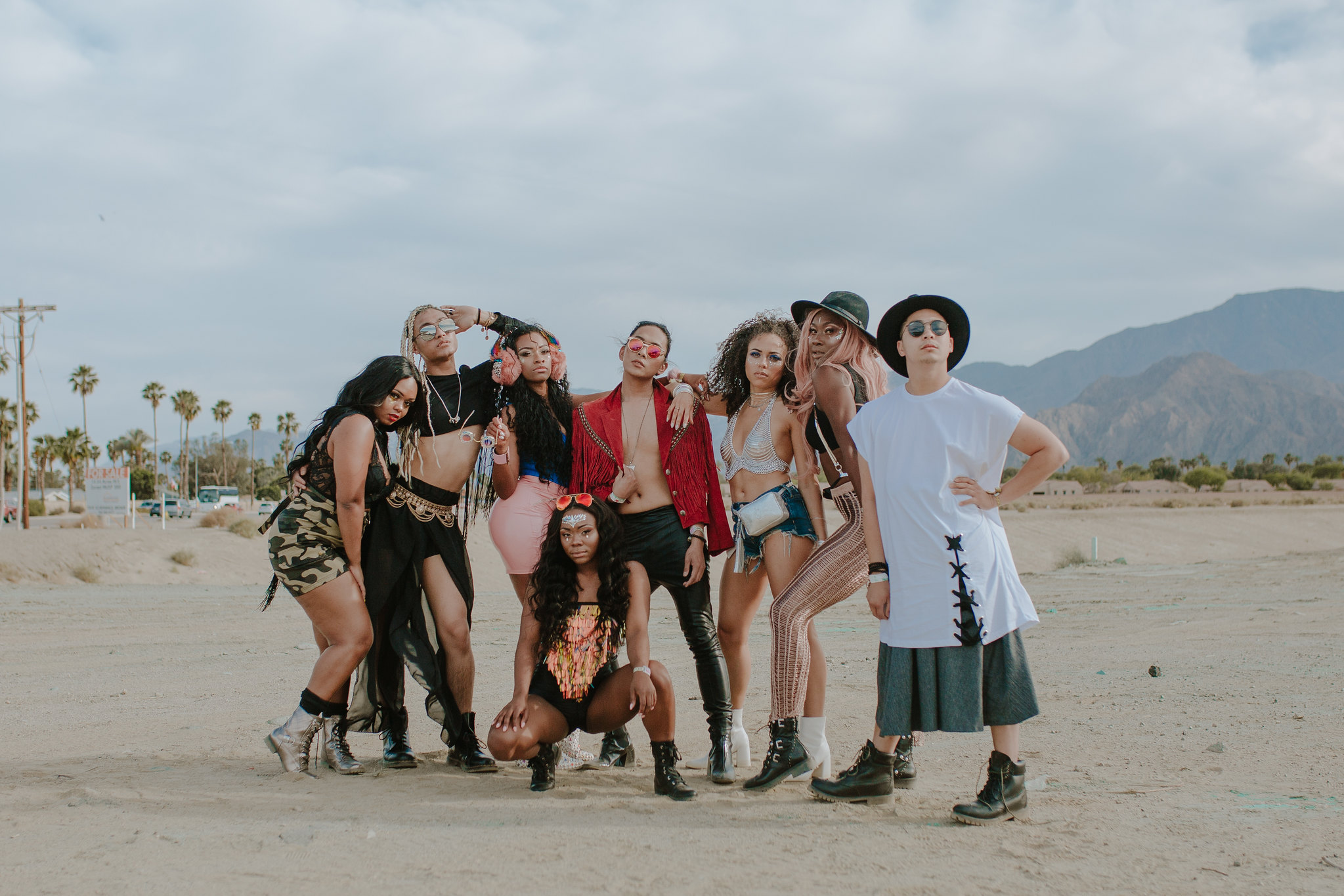 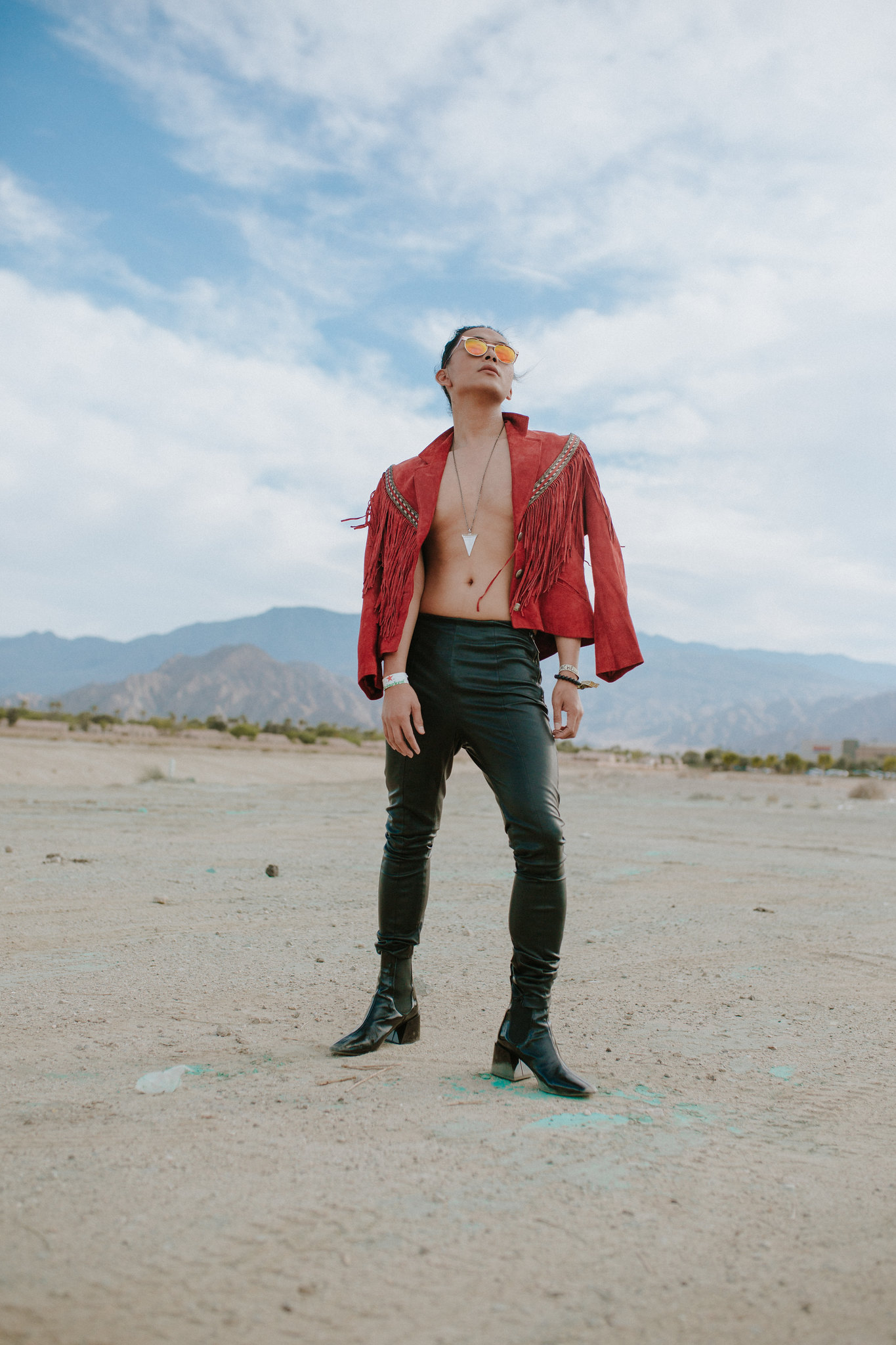 Unfortunately, circumstances weren’t on our good side that night: traffic was terrible, and parking was nonexistent. We were practically begging for a parking space for about 2 hours until we decided that some of us just go ahead and walk to the festival, while the other find a parking for our car. I decided to walk as my bladder started acting up. Of course it didn’t help that I was trying to be extra and dared to wear heels that night. Oh well! My mantra for that day: All for the Queen! We got inside the festival around 1930, while the rest of us got in at 2100. That practically took 4 hours for them to get in, no bueno! But it was all worth it when Beyonce took over the stage. She simply slays, and I couldn’t think of any artist that could top her performance, stage presence, singing prowess, and mad dancing skills. We unanimously decided to watch her till her very last song, and until she left the stage, despite knowing that this means we will be, yet again, stuck in traffic on our way home, and run into a possibility of stampede. That night, it took an hour of walking or even longer just to get to the parking lot. On top of that we had to endure  breathing dusts, and sweats, and in my case, walking on heels. Oh gosh, the things I do. Sometimes I can’t even with myself. LOL. Believe it or not, we got home around 0300 that night, beyond exhausted, but all in awe of Beyonce’s act.

04.22.2018 – COACHELLA DAY 3: In spite of not going to bed till ~ o500, my body decided to wake up at 0700 with terrible malaise, and I could feel that I’m running a temperature so I got up and decided to pop some Dayquil. I was still quite sleepy then,  but was suddenly awakened after being notified that we really made it on NY Times Fashion IG page, and NY Times Website. I ran towards Prician’s room, and woke him up with the news. 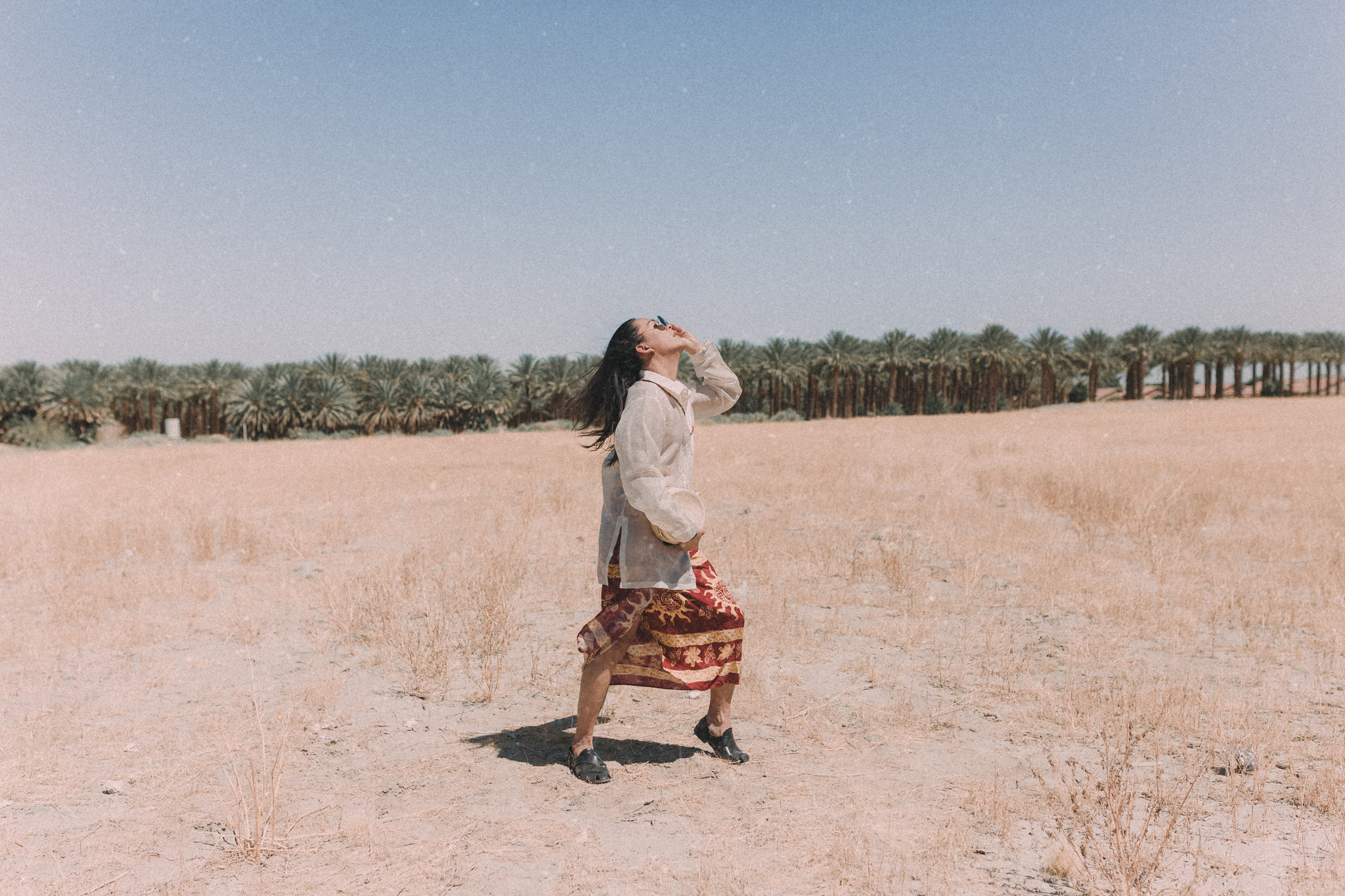 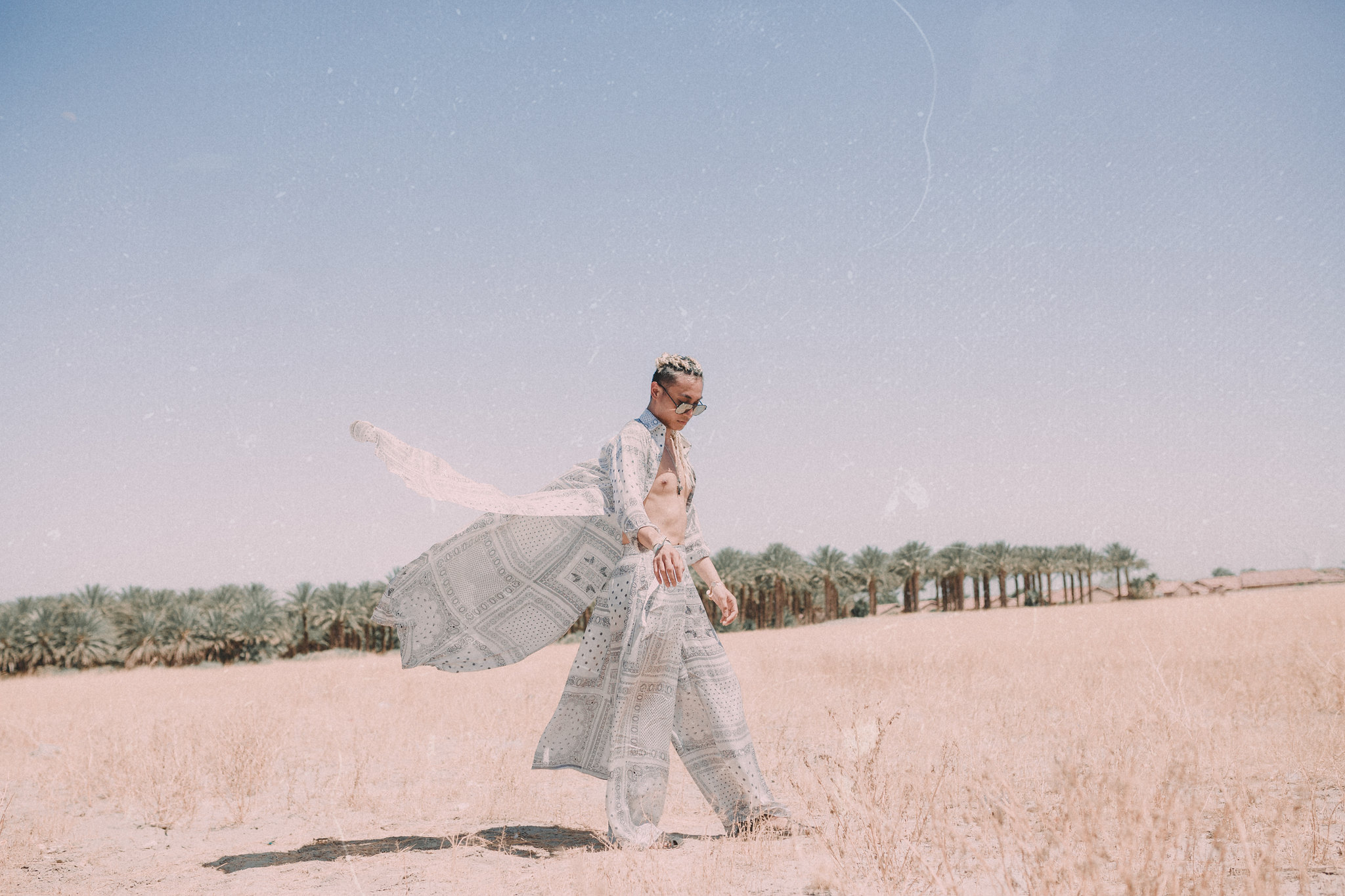 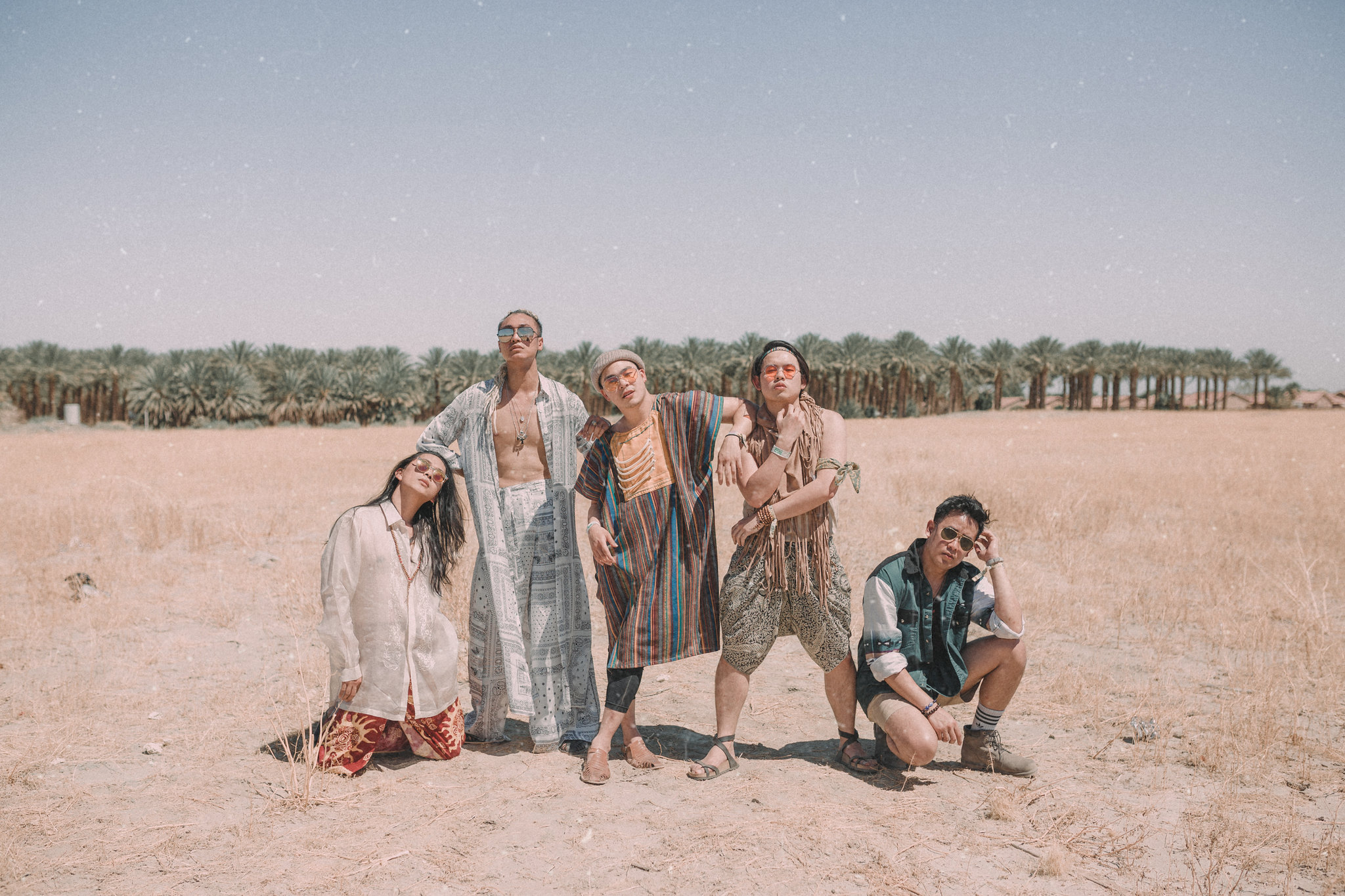 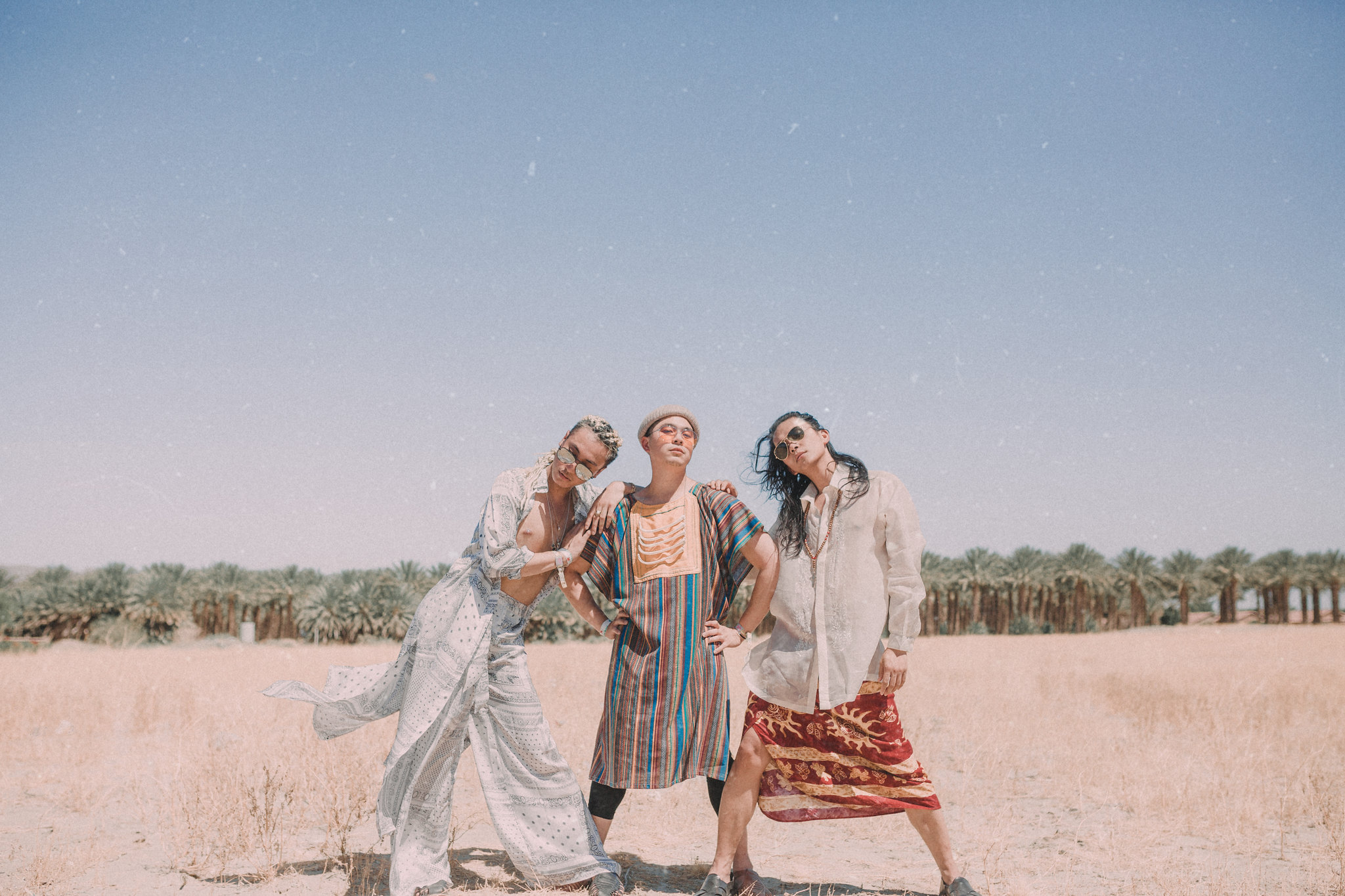 It’s the last day of Coachella so even if we were all exhausted, we made sure that we make the most out of it so we headed a little bit earlier, and per usual, stopped by for a not-so-quick photoshoot before getting inside the festival. We have enjoyed the acts of LANY, Vance Joy, and Cardi B. We were pretty closed to the stage too, so that was kinda cool. However, we were all pretty much exhausted, so we left a bit early, found us some good carb-and-grease-filled dinner, and called it a night.

Overall, the experience was amazing. We are absolutely planning on going back with more knowledge on how to have a smoother Coachella Experience. It has been an epic weekend, and is definitely one for the books.